Can you believe this photo is real?!!! 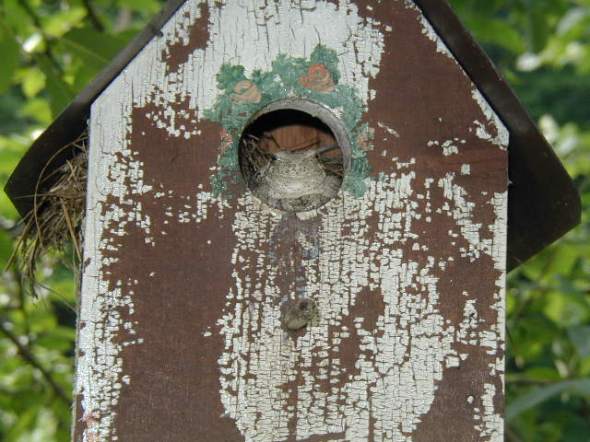 This photo of a tree frog sitting comfortably in a birdhouse hanging in a tree was taken by me when I worked at a private garden nursery in Bloomfield, CT during the summers while I was taking courses at UCONN’s College of Agriculture and Natural Resources in 2009.

One day, the homeowner, who was also my boss at that time, a landscape designer, came up to me to say, “Come see a tree frog in our birdhouse.”

Well, I could hardly believe my eyes.

Just look at how the frog’s hands are crossed. Talk about enjoying his new residence. I wonder what the bird thought when he peaked inside.

I saw a lot of things at their nursery when I worked there. Their greenhouse and plants were setup behind their home, and one day, I saw a bear.

Well, to be accurate – the bear saw me. I didn’t have a chance to see him because when someone yelled out to say there was a bear approaching me, as I was working at a potting bench in the very back of the nursery, I ran so fast to my car, I didn’t take the time to turn around to see it.

The funny thing was usually I had a radio on to keep me company, but that day, it wasn’t on and only a slight breeze in the air was making sounds as the trees around the property were rustling in the wind.

In fact, I was really deep into the zone, potting up plants and arranging some container gardens for a client. That bear could have walked up to bite me in the rear, and I would have not seen it coming.

Another interesting creature, which visited their property regularly, was a very long black rat snake. The first time I saw it moving by some pots on the ground, it startled me – but it didn’t scare me like the bear did because snakes tend to move on quickly.

However, after that sighting – every time I saw a glimpse of a black hose on the ground for watering pots, I would hesitate to make sure it wasn’t that black rat snake again.

Dragon flies would dance around in the sky and butterflies would rest upon flowers. One day, I found a dead dragon fly and took a photo of it as I gently placed it on this leaf.

Even though I worked the grounds alone most days, because the landscape crew would leave after gathering up their plants and garden tools in the early mornings, I was never lacking company.

Another frog lived in the greenhouse in a pot filled with water plants under the benches. I remember reading once that frogs are territorial. He was there every day peering up at me as I walked by on my daily routines.

So, for this week’s Flashback Friday, I had to share the memories of working at a private garden nursery, and take a look back at that frog in the birdhouse.

I got the itch to make a trio of succulent topped pumpkins today!
Good morning photos. Love how the sun is illuminating my big tropical plants this morning.
Hot hot pepper flakes for the hubby!
Saw in the woods during a hike today.
Really difficult to say goodbye to this one for this year. Digging it out and storing. It has been just fabulous this summer of 2021!
These will look nice on a big succulent topped pumpkin!
My mangave is sprouting a flower!! Cool. I love surprises like these in the greenhouse.
Two Katydids have taken up residence on my canna lily flowers.
ZZ Plant back inside and looking happy.
Babies for next season. I still store after all these years. Plants power me.