The spirit of holiday decorating has hit me early this year.  This is the first time ever I have both Thanksgiving and Christmas decorations up at the same time. Part of this was due to the weather being relatively comfortable the past few weeks, except for yesterday, which was very cold and windy.  Putting outdoor lights up on a warm and sunny day is much more pleasant, so I did that before this cold hit us.

And of course, the other reason I started decorating early is because of my upcoming Cathy T Class on December 7th (you know which one).  Plus Thanksgiving is a little later this year, so time will be limited right after, at least for me, to get decorating tasks done.

So this weekend’s project was creating snowballs with Buffalo Snow.  It was easy and fun to do, and here are the items you will need if you would like to give this a try:

First step is inserting the florist pick through the center of your Styrofoam ball.  I used a 1″ ball for my first project. After it is inserted, bend the wire end of the pick to form a hook to be used as your attachment later to whatever item you wish to put the snowball on.  In my case, it was attached to a grapevine snowman’s hand. 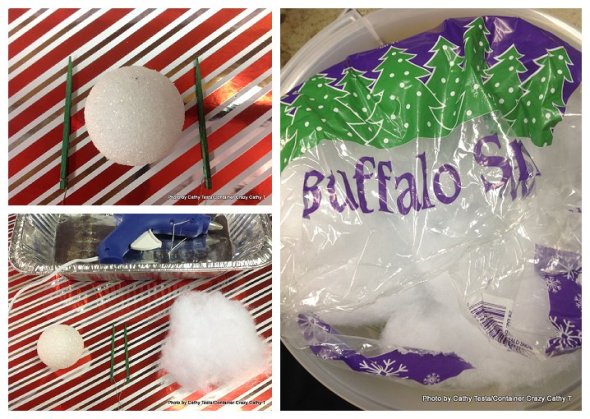 Get your glue gun warmed up.  I always set my glue gun into an aluminum tray because it drips when it is hot.  At first, I applied the glue to the ball, but once that glue gets really hot, it can actually melt the ball somewhat, so later, I started applying the glue to individual pieces of Buffalo Snow. (See below).

It helps to have small portions of the Buffalo Snow ready on the table as you keep adding pieces of it to your ball.

After the ball is completely covered, I was puffing and patting it.  It reminded me of making meatballs.  Where you have the ball in your hands and roll it, but instead of rolling, I was shaping it with just pats and pulls here and there until I felt it had a nice shape.

After I had the ball done, I put it on my snowman using the wire and a zip tie to attach it to the hand of my snowman.  After I was done, another crafty idea hit me. Why not create a few different sizes of these snowballs or puffs to hang from the ceiling?

Again, I got my pieces of Buffalo Snow set aside.  First insert the florist pick into the center of the ball.  Start attaching the pieces until the ball is completely covered.  Pat, puff, and pull here and there until you feel the ball is the right shape or fluffed look.  Be sure to play a holiday CD while crafting – it makes it more magical! 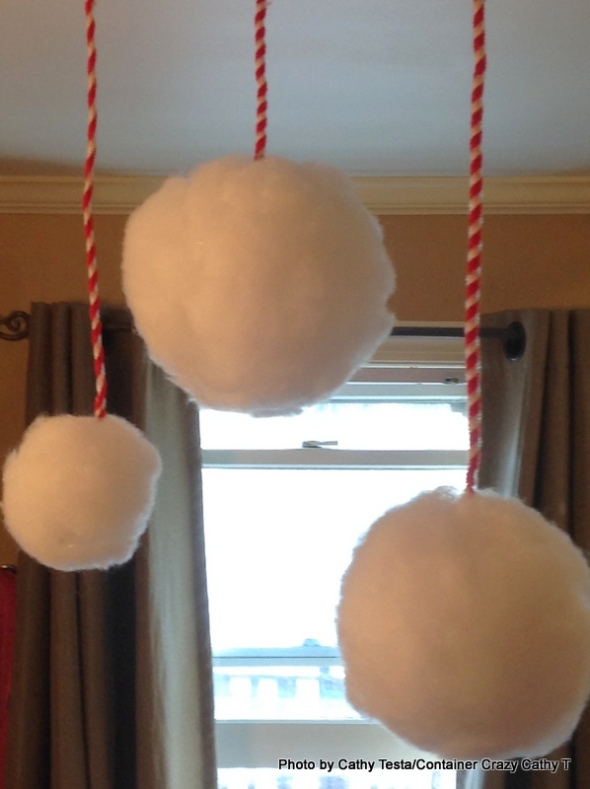 They looked rather “Whoville’ish” because of their whimsical nature and the candy cane pipe cleaners.  At this point, I decided 3 was good enough, and didn’t do the other two.  However, this set the tone of the rest of my decorations in this room.  Part of why I love to do some crafting during the holidays especially.  As you work and play, the ideas start to pop into your head!

Hope you will have some time during or after Thanksgiving to get your craft juices going too.

P.S.  I know the balls aren’t “perfect” but I’m not Martha Stewart either.  😉

3 thoughts on “How to Make Snow Balls with Buffalo Snow”