Eastern wild turkeys (Meleagris gallopavo silvestris) have routines and rituals in my Connecticut yard during every season.

In the spring, summer, and winter, the flock walks up from the woodlands into my open yard behind my house in single file. Their first stop is the bird feeder.  They hit up the fallen seeds near our lower deck by scratching the ground for leftovers.

Last year, around this time of year, I thought about how the lower deck is a great place to position our motion sensor outdoor camera because it would capture images of the flock as they were eating seeds from the ground.

It worked.  The camera captured images of male turkeys puffing out their feathers and strutting their stuff.

And as you can see from these photos, it is truly astonishing how large they look when fully puffed out.  The male toms can reach 4 feet tall, but they look even larger at this stage.  And you will notice, its blue head and red caruncle at the neck is in full color.  I guess this occurs as another way to “show off” to the female turkeys in the group.  It is just incredible what these guys do for their females.  They put on quite a show.

After they are done snacking on the birdseeds, the flock will slowly and cautiously walk past my side door over the driveway, and then proceed down my long driveway to the road.  As they strut along in single file, it is quite amusing.  I always think to myself, “Well, there they go, off to work again for the day.”

They probably have a routine of visiting every feeder or garden on our street, but by late day, you can guarantee, they come right back down my driveway – in single file – to return to our birdfeeder for their last snack before retreating into the woods again for their evening roost.

Once, in the very early morning, I could see several turkeys perched way up high in tall pine trees.  Eventually, they fly down again, and it is something to see a big turkey gliding through the sky to land on our lawn.

There’s been times when the turkeys have stood on a railing of our deck or on the edge of the pool.  Usually there is one turkey “on guard” being careful to look around for potential threats.  The guard turkey won’t eat with the others while on duty, and sends out warnings sounds if something, like me, comes by.

But this past summer, there were many times when the turkeys would also sit in the yard and relax.  They are getting comfortable to say the least.  And a few times, in fact, this summer, when I was on my deck sitting in a chair, they would extend their necks up to look at me, but they didn’t run away. Until I got up.  Then they would feel threatened and take off or at least move a distance away until they felt it was safe again.

Another time, I saw two toms in a serious battle in my front yard.  Their necks were wrapped around each other – and each pushed and tussled the other as they were locked into this position for at least a half hour or so.  At times, I was sure one would have their neck broken by the other.  I felt sorry for them, but best to let nature do their thing as they continued into the woodlands to duke it out.  I didn’t witness the end of their wrestling match.

In early June, the young baby poults arrive.  There are many with the female hens.  It does not take long for them to grow up and look like full sized adult turkeys. And then there are times when I see a solo turkey in the yard.  He wanders the yard by himself.  But, I guess they do this until they find a mate.  Or he thinks I’m his mate, he seems to like hanging around.

Another year, we had an injured turkey visiting – walking with a hobbled leg.  Because he was weak, the other turkeys would be a little aggressive towards him.  However, he wouldn’t give up and continued to stay with the group as much as he could.  The turkey pecking order is strong, and part of the wild scene you have to accept, even though it seems cruel at times. It is wild turkey bullying.

We don’t directly feed the wild turkeys, but allow them to take what they find from our yard.  They have never damaged our gardens, and sometimes will peck at the blackberries, but overall, they have been harmless.

Our cat inspecting the hidden camera, notice her ear moves in second shot!

And as close as they get to us proximity wise, no real danger has ever come to us ever since we’ve been witnessing them here in our yard.  They only bring us joy because they seem so comfortable here and offer an occasional laugh, like when they chase off our cats.  It doesn’t take long for the cats to realize who is in charge.

When I find turkey feathers left behind in the yard, I collect them to use in decorations, like I did with a pumpkin this year, or I’ll put them in my Thanksgiving Day arrangements or on Christmas wreaths. 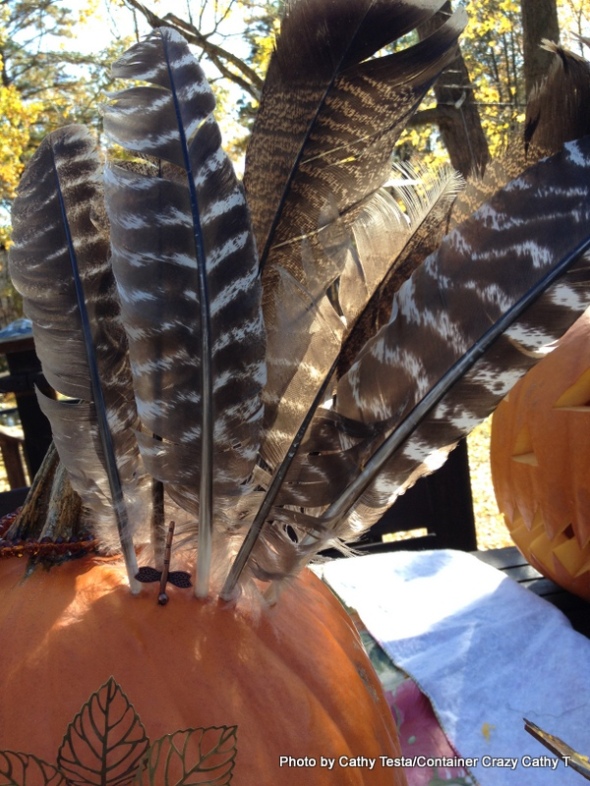 The gobble noises and sounds made by the wild turkeys can be quite loud at times, especially during their breeding season in the fall.  I’ve read you can hear it from a mile away.  I’m not surprised. I often hear them in my backyard from the house.  I love the noises they make because it is interesting.  The different tones and cackles represent every action or purpose.  One of these days, I will know them all.

But the most interesting thing I think I saw in regards to wild turkeys was when one was helping an injured turkey across the road.  A large turkey had a small one under its big wing, and was carrying it away.  At first I wasn’t sure what was going on, but as I approached closer, it appeared the mature turkey was carrying away an injured smaller turkey, perhaps hit by a car. 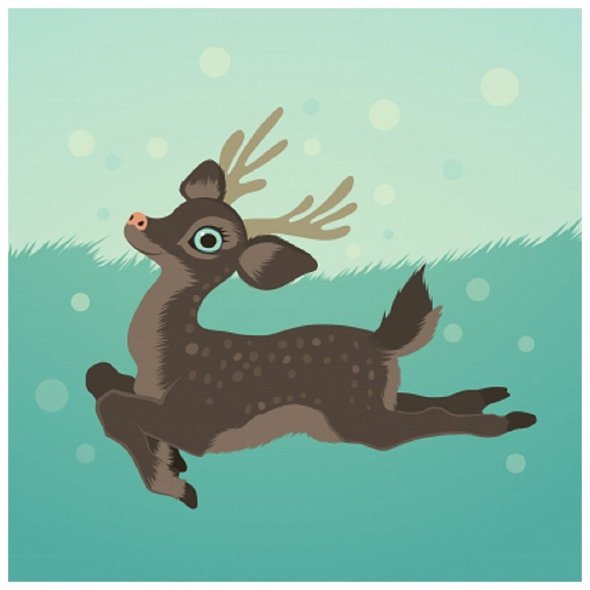 Nature never ceases to amaze me.  And with Thanksgiving approaching, talking about wild turkeys seems a bit appropriate.  Unless you like to eat them.  In that case, I say stick with the store-bought or farm raised types.  I suffer from the Bambi syndrome.  I prefer to watch the wild types, and can’t seem to eat meat from wild deer, turkey, or rabbits.  No matter how many times my hunting relatives tell me it is good.

It is only 2 weeks until Thanksgiving everyone.  I hope you have a very pleasant holiday and spot some turkeys in your surroundings.  If not in your yard, perhaps on your plate!

We purchased our camera from Cabela’s.  It is called RECONYX Hyperfire model, and it has worked very well at capturing motion in the woods or other areas of our surroundings as we have moved it around from place to place. We have also captured photos of deer, a bobcat (Lynx rufus), coyote, fox, racoons, beaver, skunks, our male cat, other stray cats, rabbits, birds, and even a man with a machete.  Turns out it was a neighbor (phew).  One very interesting shot was when a deer bed down to sleep right in front of the camera – very cool.  And moving trees, leaves, even sunshine casting down, showing shadows moving across the ground during the day, is photographed. Snowstorms are fun too as you can see the level of the snow rising over time in sequential shots, so long as it doesn’t bury the camera. Maybe even YOU were snapped – a friend captured when you came by to visit – Bet you didn’t know that, did ya?  LOL!!!

7 thoughts on “Living with Wild Turkeys in My Connecticut Yard”