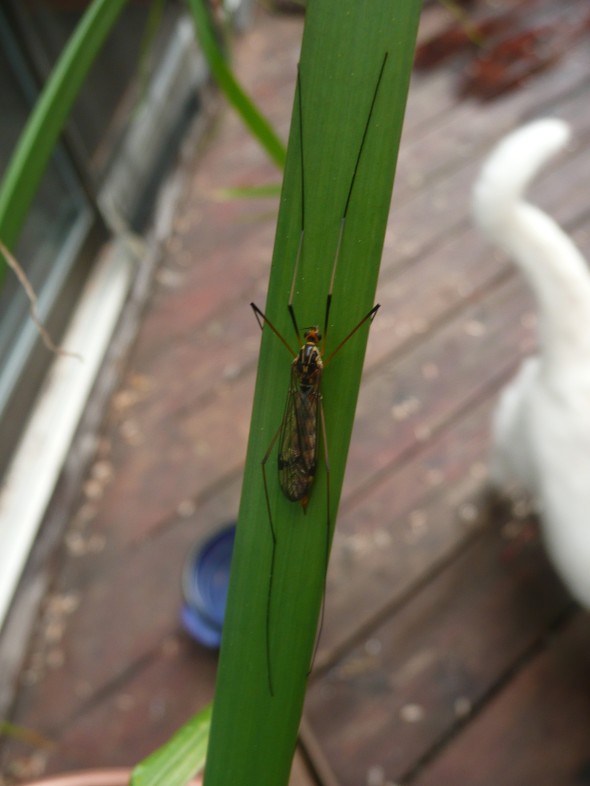 For t0day’s Photo Friday, (which by the way will be on pause until I get a new camera to replace my recently dropped and broken one) is a photo I took about a week ago.  This flying insect, which I don’t know the name of, is one of those big, yucky looking flying bugs you usually see in the evenings that resemble giant mosquitoes.  You know the ones.  They tend to freak me out because they bob around on the ceiling if one happens to get in your house, or suddenly hit a light or window when you least expect it – And ugh! I never want one of those big ugly critters to land on me!   They always fly around as if unable to determine where to land or fly disoriented like they may crash into you.

But this one, that afternoon, had decided to land on the stem of my Cyperus papyrus King Tut umbrella grass plant.  It is funny how this particular insect selected the shape of a stem that was perfectly suited for his long, lanky body with legs of the a longer length.  Notice how he grabbed the edges of the stalk’s flat surface with his front legs wrapped around it.  And it’s other front legs are laying above his body on the stalk.  But I discovered as a researched more this may not have been the only reason for its selection of the Cyperus plant.

The plant he chose is a water lover.  It can sit in a container with water, as mine is at home. And not shown here, the plant also has very interesting leaves which sprout from the tip of its upright, tall, and firm stems.  The leaves look like umbrellas on the top.  It is grown as an annual here in CT, but it can be overwintered as a house plant if desired for continued enjoyment and use.  At the moment of this photo however, it was being used by the insect as a little habitiat where the insect seemed pleased to rest for a bit.  But then I discovered this insect, probably a Crane Fly, tends to frequent water plants.  So there you go.  He likes this plant for that reason as well.  And thankfully, crane flies don’t bite like mosquitoes do.  My fear of them started to subside even more.

Ok, so that day, when I had quickly grabbed my camera to zoom in closely, sddenly, I noticed the beauty of this insect’s design for the first time.  It’s patterns, his eyes on an orange colored head, and coloring on his back is kind of neat, geometric black, and well, actually somewhat cool so long as it isn’t bobbin over my head unexpectedly.  Fortunately, he stayed put as I took a couple snapshots. He was waiting for take off and seemed quiet for the quick photo shoot.  So this is the one for today’s Photo Friday!  🙂 Cathy T 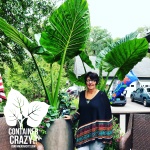