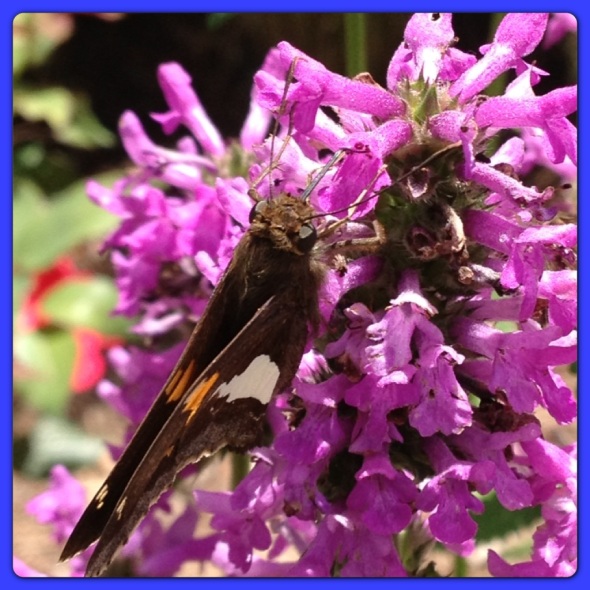 Stachys monieri ‘Hummelo’ is a perennial I spotted for the first time a couple seasons ago.  Because of its tall blooms, I decided to include it in a whiskey barrel container garden, and thought it worked well when going for a naturalistic theme because it has a soft color to its blooms and the stalks are tall, rising upwards like you would see in a meadow. 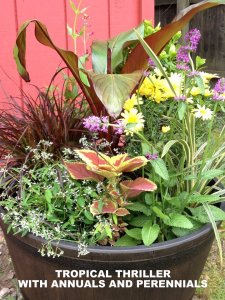 ‘Hummelo’ in a Container Garden

If you like the cottage garden look, or a perennial with the power to attract bees and butterflies for a long period of time, you need to say, “Hello” to ‘Hummelo’ – A lamb’s ear perennial with a different look and feel.

The color of the blooms, violet to a soft purple, and the shape of the two-lipped flowers, similar to the perennial, Catmint (Nepeta), have a welcoming appeal.

Because of this, I decided to plant two in front of my border by a Knockout Rose this year, and the plant’s habit and characteristics have impressed me since.

Despite our bouts of harsh weather this season in Connecticut, such as hail storms, strong winds, and heavy rainfalls, this plant has not bent, cracked, or toppled.

And the flowers, rising 18-24″ tall on strong, 4-angled stems above the low-growing clump of soft green wrinkled leaves, have been blooming continuously since early June.

It has a long season of bloom, expected to last to the end of August or early September, and it is a butterfly and bee magnet. 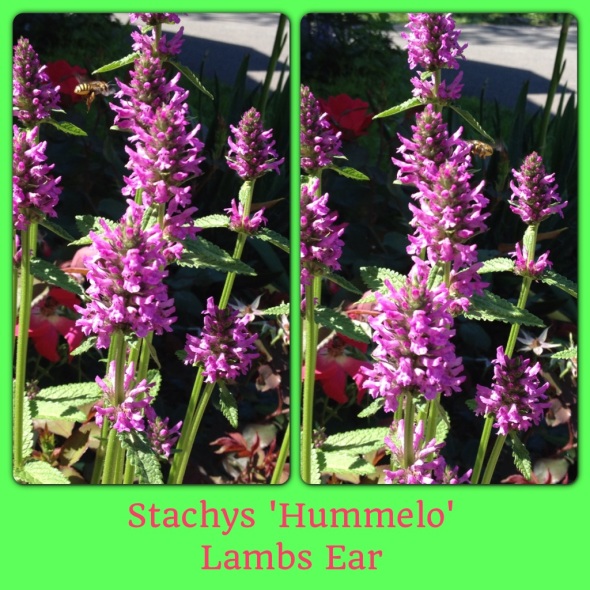 However, what makes this lamb’s ear perennial different is the look and feel to the leaves, which are not like the typical species known to gardeners, Stachys byzantina, where the leaves are fuzzy and woolly, soft to the touch. 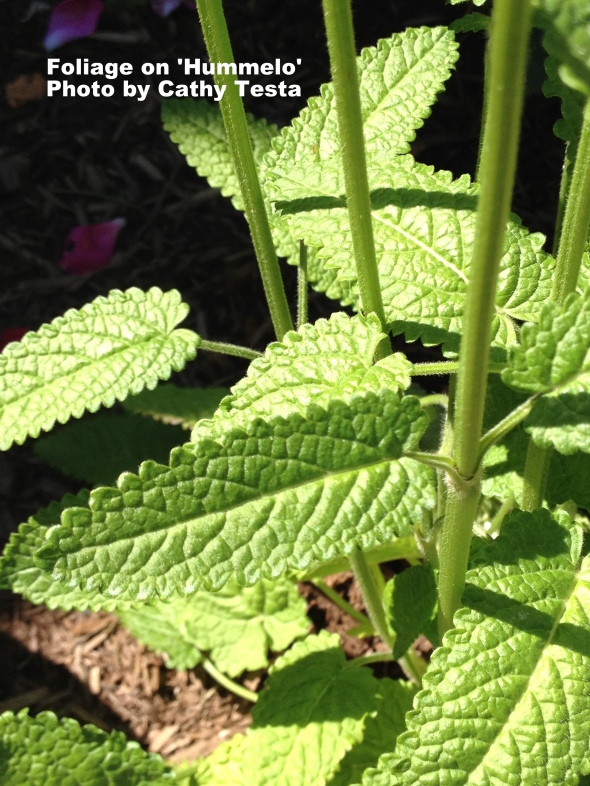 ‘Hummelo’ has wrinkled and wavy leaves.  The texture gives it some interest but I find the color of the leaves a little dull – just your basic plain, soft-green, so what you place near and around it should be considered.  You may want to find other perennials with a darker green foliage color, and pair up the beautiful violet blooms of ‘Hummelo’ with other monochromatic colors in the pink and purple tones, along with some contrasting coarse colors and textures. 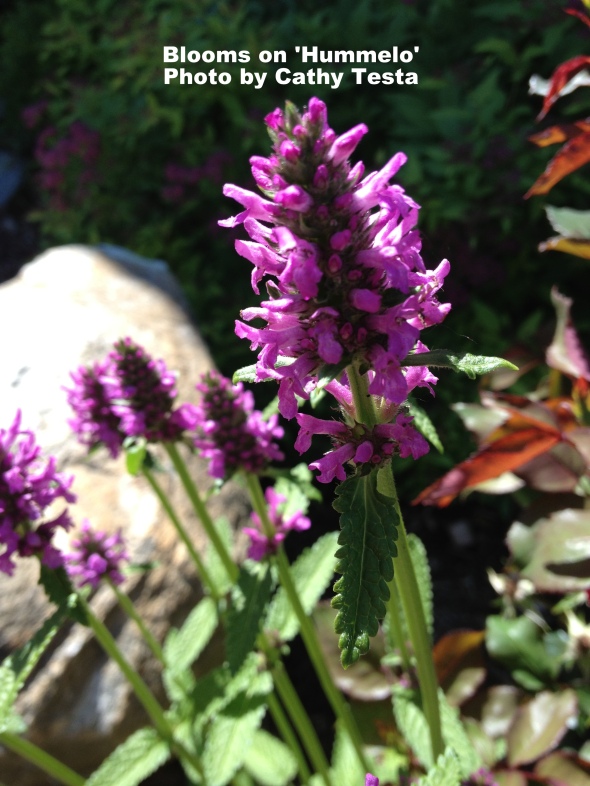 Some companion candidates for Stachys monieri ‘Hummelo’ are:

Baptisia australis (False Indigo) has tall darker purple blooms on tall flower spikes, as compared to Hummelo’s bloom color, and its foliage is a bit darker green.  It will end its bloom period around the time ‘Hummelo’ begins, but the dark seed pods will add interest later in the season.  Place it behind ‘Hummelo’ to add impact and height.  It can reach shrub size, and is great at the back of a border in full sun to part sun locations.  And it also has a “naturalized” look, similar to ‘Hummelo’ – plus it was the 2010 Perennial Plant of the Year.

For a dramatic effect next to ‘Hummelo’, try a tropical Colocasia esculenta ‘Maui Magic’ (Elephant Ear).  Its large, coarse and wide foliage with dark purple tones on the leaves and stems will be a great way to add contrast against the soft greens of ‘Hummelo.’  This gets large, so position it where it won’t eat (hide) the ‘Hummelo’ perennial, but pop near it.  The purple stems on this elephant ear will look great with the violet blooms of ‘Hummelo’ – and the soft green foliage of ‘Hummelo’ will pop against the dark tone of the elephant ear. 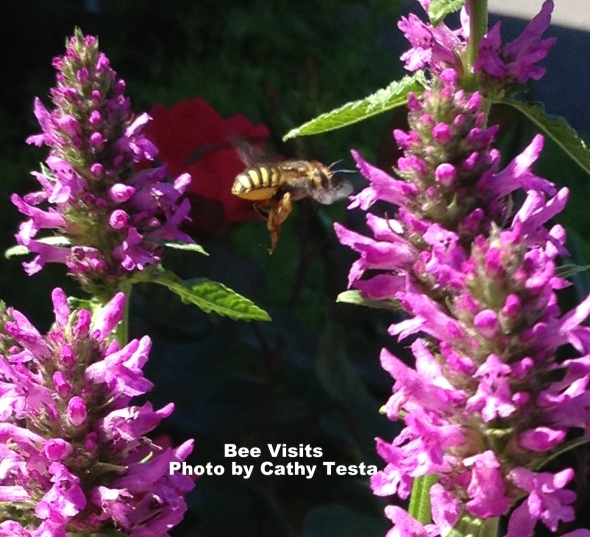 Incorporating some soft silvers in a more sunny location, such as Artemisia (Wormwood) is a good color to add.  I prefer Artemisia schmidtiana ‘Silver Mound’ with its soft airy foliage and dome shape, with lower stature than ‘Hummelo.’  This plant likes full sun and well-drained soils.

Another darker purple bloom color that would look great as a contrast to the softer violet blooms is Centaurea montana ‘Black Sprite’ (cornflower) with almost black-purple flowers blooming in July to August and reaching about 14″ tall.  The spidery like bloom structures is intriguing and would also pick up the darker purple colors of the Elephant Ear noted above.  It can take full to part sun locations.

Pronounced STAKE-IS (Click HERE to hear), Stachys monieri ‘Hummelo’ is a relatively unknown plant, great as an edger in garden borders, filler in container gardens, and provides a uniformed, sturdy look, and it is a “workhorse” because it has long-lasting blooms and strong upright stems.  And, it can survive under walnut trees.  This plant is a member of the mint family, so be aware it can spread, and often looks good massed or as a ground cover planting.  However, if used in a container garden, it is not a trouble marker, but a star – where you won’t have the spreading concern.

If you decide to use Stachys monieri ‘Hummelo’ as a ground cover, you may want to consider including some Ajuga reptans ‘Burgundy Glow’ for the foliage on this low perennial, also great as a ground cover, has soft pink and violet tones to it.  Put it in-front, and be aware it is mostly known as a shade to part-shade plant, but can take sun with moisture. 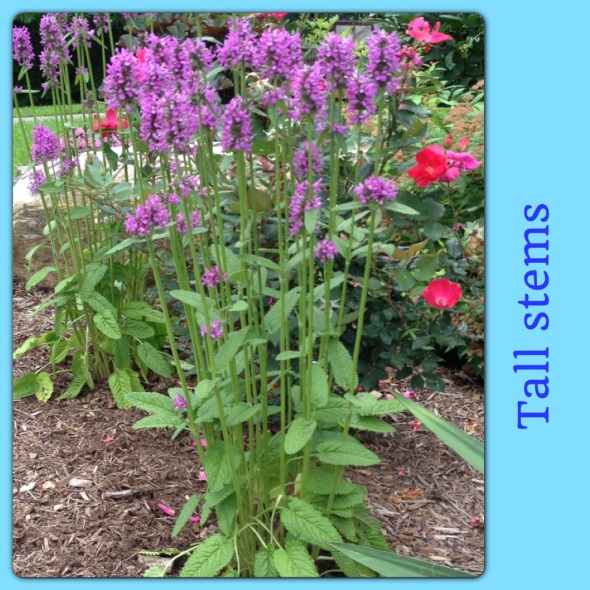 Stachys monieri ‘Hummelo’ is a Zone 4-8 perennial, prefers Full Sun, and is a great addition to your gardens and container gardens.  Some references spell it monnieri with two n’s on the species name.  It is also known as Betony.  Click HERE to read a “Comparative Study of Cultivated Stachys,” by the Chicago Botanic Garden, where you can learn lots more technical details about this plant and its relatives.

Note: 2020 dates are tentative. Formal schedules to be released in January.

All workshop details are posted on www.WORKSHOPSCT.com where you may register and find links to pre-pay.

Minimize Waste – And Make The Most of Resources.

The Need for Soil-Friendly Habits are Increasing.

Plant Parents of Houseplants continues to Thrive. And Succulents are Still On Top for Popularity.

Frog-Friendly Gardening and Spaces – Yup, it is time to Save the Frogs.

Mushroom Power – Many Benefits – Do you know them all?

Indigo – BLUE – is the Trending Color predicted for 2020.

I will be blogging in detail about these predicted trends listed above. Ribbit. Cathy T.

Thank you for visiting my blog today, and please share it with your gardening and plant lovin' friends. If you have any questions, feel free to contact me at containercathy@gmail.com. Cathy Testa